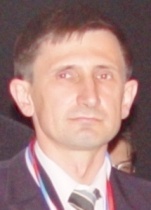 Nikonov: "My first games on renju were at the end of 1980 when I got invitation from Vladimir Sapronov, the Soviet Union renju founder."