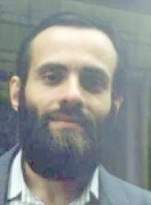 Tarannikov: "I was born in Prokopyevsk, Kemerovo Oblast, USSR. I start to play in tic-tac-toe at the infinite board near 1980 when I had wrote about this game in the book "Mathematics at the chess board" by Eugeny Gik (in Russian). About the game "Free Renju" (Five-in-a-Row) I had known in the beginning of 1983, and at that time I had participated in my first tournament - school championship. I was second. I remember that in the last game I needed in win to divide the first place. We played by drawing signs at the paper. All 225 possible signs were drawn and after this during some time I continued to find an accidental winning five.

My first Renju tournament was Kyoto Open in 1989 (after Five-in-a-Row World Championship where I was second). I remember that during the game with Tanaka I had asked Sokolsky: "If one of two fours is open then is this a double four?" In Kyoto Open I took 4 point in 7 games and was 13th from 40 participants."