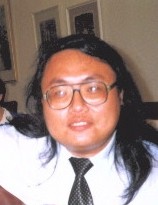 The first renju player from Taiwan. He joined the international tournament in Japan in 1991 and been active in renju since then. He also played in international WC QT in 1993.