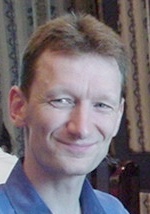 Stefan Karlsson is the most successful Swedish player. He started to play renju in autumn 1985.

Karlsson: "I met a teacher at my Gymnasium School. The teacher was the present President of RIF, Tommy Maltell. We continued to meet and we were both members of the local Renju Club in J�nk�ping. Tommy taught me renju and helped me climb my first steps on the high renjuladder."

Karlsson: "About internet-tournaments, I had the 4th place in E-mail World Championships 1997 and I had the 2nd place in the first really international "on-line-tournament" that was played in December 1998.

The best player I have ever played with? Hmmm....it is actually not so difficult to answer. I have never met Shigeru Nakamura, so the "easy" answer will be Ando Meritee. I've played many games with him and he is very strong. He has control of the position in a way that noone else I've met have. I have met several Japanese players that have some equal qualities as Ando, but they are not so complete as him.

Renju is a fantastic board game. I think it is that fascinating because the rules are so simple, but the game is still complex and contains "deep dimensions". Renju demands both the logical side and the creative side from the person who wants to become a great player. You must both be able to concentrate, count a lot and also possess an ability of intuition, to create moves and positions.

I'm lucky to have a fianc�e who also like this fantastic game very much and we will for sure take part in many renju tournaments in future. About expectaitions for me as a player, it would of course be very nice to have even better place than no. 3 in World Championships. We'll see what future will bring us."

He is a treasurer of Renju International Federation, handling all the financial issues of the organization. He is also a member in several RIF commissions.