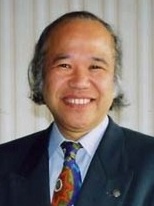 Yoshimi Hayakawa is a living legend of Renju, a father of today's Renju. He has spent the last 40 years spreading renju in Japan, uniting Japan renju communities, and bringing Japan out to the world, to join the RIF. He has done so many things for renju, but most of us know only a little about it, because of the little information that we receive from Japan.

He has been running the Renju Association, Club, School for Children, School for Senior Citizens, and many other renju activities and events. His activities in International field started with the visit to Sweden in 1982.

The Renju Association in Japan has honoured him with 9 dan title for his life-time work for renju. This is the highest title in renju. A few people in the world ever reach that far. Besides, Yoshimi Hayakawa is a great renju player as well. His excellent skills have proven that he is truly 9 dan level as a player as well! He has got many good results in Japanese tournaments, and being successful in the tournaments outside Japan as well. He has also participated in the World Championship finals, and beat the World Champion there. Unfortunately, being a co-ordinator of renju, manager, leader, teacher - he must share his energy among all these things, and thus may not always have time to enjoy the glory as player.

Hayakawa is the man who can bear lots of pressure and can handle the leadership well. The World Championships of 1989 and 2001 in Kyoto, they were all on his shoulders. He made a wonderful arrangement for the World Championship 2001, he dedicated the whole of his time and energy into this. And not only that, he was also the one who donated the largest sum of money into the World Championship fund, making this tournament be possible and successful. Only a few people know about it outside Japan, therefore it is very fair that we mention it here, letting people respect and admire him for that! He has been a very important person for RIF, too. Not telling much during the RIF meetings, but when he says something, people always agree with him and respect his words. It speaks of the very powerful and great man. He was, he is, and he will remain the key person in the world of Renju. All the big changes that renju may go through, will always be led by him, by his initiative. Many people may talk a lot, but he talks a few, but does a lot! This kind of man earns everybody's respect.

He retired from the post of RIF Vice-President in 2001, by his own will. Had he decided to continue in his post, he would have gotten 100% support by all RIF members. Now, as he is not active in RIF now as a Vice-President, he has more free time to support Japanese renju and help about its popularity. On the other hand, he will always be connected to RIF, as the representative of RIF Founder Member country - Japan. If anyone has a chance to meet Hayakawa, you can find out a lot about renju, its history, and its legends! Thank You, Yoshimi Hayakawa, for bringing renju to us!