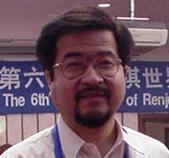 Nishizono: "Before that day, I played gomoku personally, and I could win all game against my friends even if I played white in GOMOKU's rule. So I think (believe) that I'm one of the top GOMOKU player in Japan. One day, I found Renju club in Kyoto. So I played Renju in this club. BUT! . . . I lost many games easily against young boys. My confidence was destroyed by them. After that, I learned renju books, I played many games."

His best results are the 10th place in World Championship 1999 in Beijing and the 1st place in Meijin Tournament 1998, in Japan.

Nishizono: "Why do I play renju? I can't explain. I like to teach something to other people, not only Renju. Renju is the game which is easy to teach (learn) first and has long way to climb up. This will be the reason that I continued to play, enjoy, teach, Renju.".