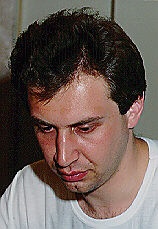 Nosovsky: "I have started to play Renju in 1978 year together with my schoolfriends Nick Alexandrov and Vyacheslav Brover (now both members of California Renju Club). Brover was able to read Japanese and we had went to the Foreign Libroary and were reading newspaper "Akahata" where some Renju problems were published.

We had solved them and so we know some about Renju, when in Newspaper "Sovetskiy Sport" was published article "Lets play Renju". We have met Mr. sapronov who had contacts with Nihon Renju Sha.

Nick and I have solved 1-st Dan Test in 1979 year and have received 1-st (koka) Dan in April 1979. So I was the second european who had got Dan level in Renju after Mr. Sapronov.

Then we started to spred Renju at the former USSR, publishing series of articles in "Nauka i Zhizn" megazin. After that a lot of five in a row players started to learn Renju at former USSR.

I was first Chairman of Moscow Renju Club.