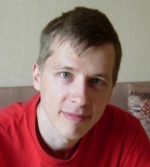 The two best results of his renju career were the full 11 points from 11 games in World Championship 2001, and the win in the match against the worlds biggest renju legend Shigeru Nakamura, with the score 3.5 : 2.5 in Kyoto in 1999.

He started a teaching project of Online Renju Class in May 2000. The school was active for a decade and was located at www.renjuclass.com. In 2006, he became the first webmaster of RIF website at www.renju.net.